Storm Desmond Hits – Is Mother Nature Trying To Tell Us Something?

You don’t have to be Sherlock Holmes to realise if you have land next to a river at some point it is going to flood. When we got Ellers last year we were very much aware of this fact and one of the aims of having Ellers was to show how to manage land in a flood plain. Flooding has always been at the back of our minds, but what a crazy 24 hours Storm Desmond brought. With already saturated ground and Environment Agency (EA) flood warnings changing very quickly from Amber to Red we knew the River Bela was going to be high, but we were not quite prepared for how high.
Saturday morning (5th December 2015) the Bela was nearly the same level as when it flooded on the 15th November 2015 so the question was 1) when is it going to stop raining and 2) how high will the Bela get this time? Our new mobile field shelter is located at the same level as the meadow and pond field where the chickens and bee hives are located. Previously until Storm Desmond these locations were considered the safe zones from flood, but as the day went on it was clear that these areas of the field were in danger. By 2pm on Saturday we started checking Ellers more regularly and by 8.30pm water was lapping at the field shelter doors and it was looking like the our two hen houses could also be flooded. Our sheep and Smudge (Emma who works for us horse) were locked out of the field shelter and encouraged with hay to stay on the hillock (highest part of the field) and the hen houses were put on bricks. Everything that was in danger was moved to the hillock and then all we could do is keeping checking on animals through the night. I did the last check at 12.30am and Andrew and Ray checked about every hour and half until 5:30am.
One good thing came out of the night checks as we did have a glimpse of the nocturnal life at Ellers with our local Barn owl taking shelter on our fence posts and being an opportunists as she hunted the edges of the flood water. The kingfisher also had new feeding grounds and did not seem bothered about us humans.
Our worry was that the water was going to go over the Beetham road bridge and if that happened then things were going to get really serious. Between 3 and 4am the water peaked at 2.11 metres, which is the highest ever record level (previously the last highest recording was in 1999 and the water peaked at 1.73 metres). This resulted in over a foot of water through the mobile field shelter, water lapping under the Hen houses and importantly the water had reached the top of the arch of the road bridge. By 5am the water level seemed to be similar, but by 6.30am the water started to thankfully retreat slowly and it had stopped raining! Huge relief! Animals all safe on the hillock, hens saved by bricks and the flood came within 14cm of the bee hives! 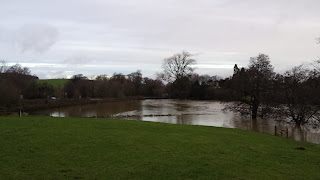 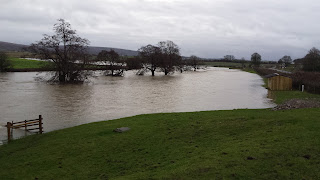 By Mid morning Monday (7th December) the Bela was back to a more normal level and we escaped lightly with a couple of fence repairs and field shelter to muck out. However others were not so lucky and Bela flooded homes (many never flooded before), Beetham Paper Mill, roads and football pitches. 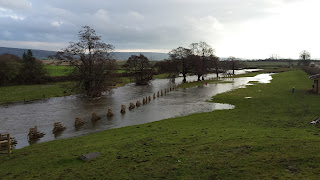 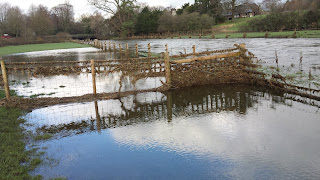 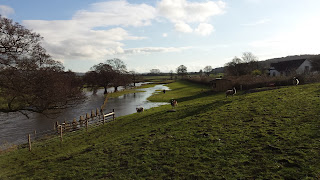 Is this a once in 100 year flood event? I am not too sure, with climate change our weather is evolving and flooding is just one element that we are going to have to adapt too. I have now lived in Cumbria for 10 years and have witnessed many floods in the Lake District and between 2005 and 2011 every November I experienced  big floods. I always say that if it rains in the Lake District for more than six hours there is a risk of flooding! There is still standing water in many fields and I can already hear the echo’s of many land owners saying we need to dredge the rivers and ditches, but I really believe we are past this thinking and we need to apply some science and common sense to the situation as it really is inevitable that in some areas you are always going to get flooding. For example just down the road from Ellers we have an area called Hale Moss, which has been massively drained for farming. However, this area at one time was a glacial lake, then a moss and is now mainly farmland with moss habitat around the edges. When we have lots of rain the area just reverts back to its natural geology of a lake until the water subsides.
We all need to change how we manage our land and not on an individual basis but as a catchment. By looking at whole landscapes and zoning it for different land uses we could make a huge different to how we deal with big flood events like Storm Desmond. The journalist George Monbiot is quite rightly highlight these issues (http://www.theguardian.com/commentisfree/2015/dec/07/hide-evidence-storm-desmond-floods-paris-talks), although the question is will the government and large land owning charities who could make a difference listen and also speak out?

Posted by Hannah Gardner at 3:01 PM No comments:

Hannah Gardner
Away from Ellers Meadow I am either running Envirotech Ecological Consultants with my husband Andrew Gardner or looking after our two boys. Both Andrew and I have spent over 15 years advising clients about ecology and land management, but now we have Ellers Meadow we are enjoying our own conservation work.